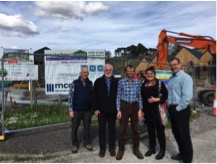 Call for New Directors! Are you interested in helping towards projects for the long term benefit of the community? Do you have skills you think would help? The company has vacancies on its Board of Directors! Meetings are about every 6 weeks, and there are lots of projects to get involved in if you want. This year the AGM will be in October to allow time for our ever-more-complicated accounts to be finalised. If you are interested in joining the Board, or even coming along to a meeting to see what goes on then drop us a line!

Sunart Paths Network  – the next working party is  2nd June from 10am – 1pm (come for as long as you like). Spades at the ready! If you’re interested in helping, get in touch with Izzy for more details. If you send us your email we can send you updates!

Visitors from Down Under– All the activity in the community these last few years has not gone unnoticed, by funders, local and national government but even other communities around the world. On the 17thMay Denis Ginnivan, from Yackandandah Community Development Company (Victoria, Australia) visited on a study tour with his wife Helen. www.ycdco.com.au 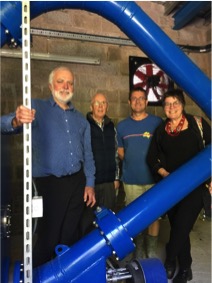 As well as a conference in Glasgow and visits to social enterprises in Inverness and Oban they particularly wanted to visit Strontian, having heard about the hard work that so many volunteers had been putting in to local projects. Robert Dunn explained them about how the community hydro was developed and this enabled the company to establish the Common Good Fund, which has in turn, helped with the Strontian Community School Building, and several other projects and groups locally. Jamie McIntyre spoke to them about the arduous journey for the school over the last two years and they were astounded by what had been achieved. James Hilder, David Barker and Izzy Baker then took them to look at the jetty and moorings, Longrigg Woodland and the dis-used Visitor Centre to indicate projects ‘in the pipeline’. Denis explained how his town bought and runs the local filling station, and is now working to become self sufficient in energy with solar power and pumped storage hydro, as well as organizing an amazing folk festival……………. And yes, Izzy our resident fiddle player was invited to submit a demo tape Good luck Izzy

There are no comments yet